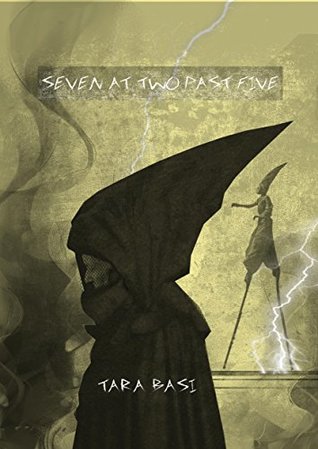 I received this book for free from OnlineBookClub in exchange for an honest review. This does not affect my opinion of the book or the content of my review. 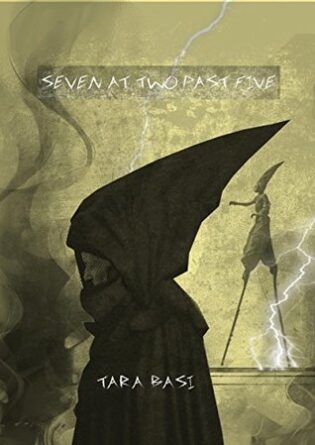 In the course of a single day, Abi is forced to battle through an absurdist, malevolent and Kafkaesque Justice system to fight her case and, ultimately, rediscover her true name and her lost faith.Comments on Seven at Two Past Five from OnlineBookClub.org - 'Seven at Two Past Five, by Tara Basi, is bizarre - in a good way. It is simultaneously weird and wonderful, fascinating and frustrating. I have never been so caught up in, aggravated with, and yet satisfied by a story. If this novel was a person, then the relationship we had while I was reading it was tumultuous but, somehow, completely irresistible. When we agreed, it was wholeheartedly. When we didn't, I wanted to throw things.''The author's voice and style effectively swallowed me up so that I was helplessly carried along by the steady pace of events and my overarching questions: What is going on?''This completely compelling novel is as artfully crafted as Abi's buttons. I would characterize it as an allegory with a heady mix of suspense, humor, drama, satire, surrealism, and a plot more twisted than any other book I have ever read. Whenever I thought I had a handle on the story or what would happen next, I was wrong, but never disappointed.''If I was forced to compare it to other works, I would say it is Alice in Wonderland meets Pilgrim's Progress meets Monty Python, but these juxtapositions do not do it justice. I truly feel that Seven at Two Past Five is a very singular experience and no comparison is a fair one. '

Abi is being unjustly judged, at least in her opinion. Others are not so sure that her judgement isn’t well earned. Upon setting out to appeal her unjust judgements, Abi is drawn into a whirlwind of jumping through hoops to get her appeal approved. She receives ever more judgements and meets some interesting and, dare I say it, obnoxious, characters along the way. She has to finish her appeal all in one day and each new requirement is more bizarre and frustrating than the last.

Have you ever read a book that you just had to know what was going to happen next, had to know how it ended, but at the same time wondered what the hell am I reading? Perhaps you’ve read a book all the way through and while you thought it was a great book, you also wondered what on earth you just read. That is what Seven at Two Past Five by Tara Basi is like. I literally couldn’t stop reading this book and when I had to, I kept wondering what I would find when I got back to it.

Abi is an interesting character. I felt so bad for her the entire time I was reading this book. She clearly didn’t deserve this treatment, yet she and Zero seemed to be the only ones who actually felt that way. Her insistence that she is Abi, an elderly button-maker, no more and no less became heartbreaking at times. I just had to know what was going to happen to her. Was she going to face punishment for her judgements? Was she going to be exonerated? I had to keep reading.

Seven at Two Past Five reminds me a lot of dystopian novels like The Handmaid’s Tale but with an even more bizarre twist. Where The Handmaid’s Tale is more of what religion has done to society, Seven at Two Past Five is more about what society can do to religion. When you come down to the end of the book, you start to understand more about Abi and why she would insist on being just Abi the button-maker.

This novel is wonderfully written. The editing was clean and if it wasn’t perfect, it was perfect enough that I never noticed any errors. That’s saying something because I almost always notice spelling, grammar, and punctuation errors when reading books. It’s one of my pet peeves. So when I read a book and I don’t notice any errors, that’s saying something. The character development is wonderful and while you might not see it at first, you definitely figure out what makes each character who they are later. There might be one or two characters who could have been a bit more developed but it isn’t enough to detract from the story.

I gave this book 4 out of 5 stars because of the weird factor. I will be honest, if you’re religious (especially Christian denominations) or if you take your religion very seriously, I don’t suggest you read this book as you may find that it is offensive to you. If you’re into bizarre, dystopian-type books and aren’t easily offended in religion, I definitely suggest reading this book.