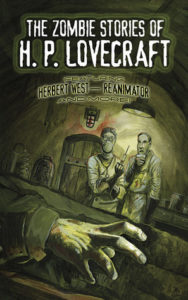 "A fantastic anthology by the true master of horror fiction. Highly recommended." — Book Nutter's Book Reviews "This is an excellent collection of Lovecraft's 'zombie' stories, which serves both as a treat to old fans and a sampler to people who haven't read Lovecraft before. I would highly recommend this collection." — Of Stacks and Cups Joyce Carol Oates, Stephen King, and other experts on horror fiction deem H. P. Lovecraft the master teller of weird tales. These six chilling stories ― all published between 1921 and 1933 ― offer compelling journeys into the land of the undead. The collection begins with "The Outsider," the tale of a recluse whose overwhelming loneliness emboldens him to seek out human contact. Subsequent stories include "Herbert West ― Reanimator," written as a satire of Frankenstein and used as the source for a popular horror film; "In the Vault," in which an undertaker experiences supernatural revenge; "Cool Air," an account of a doctor's fanatical obsession with defying death; and "Pickman's Model," focusing on an artist's gallery of nightmares. "The Thing on the Doorstep" concludes the compilation with the compelling tale of a man whose body is preyed upon by a spirit that refuses to die. "Highly recommended. A great way to re-animate Lovecraft's standing as a master of the horror genre." — Looking for a Good Book "A delightfully horrific collection of tales that will thrill any horror fan!" — A Universe in Words

When I think of zombies, I think of undead beings who stagger around, moaning and groaning, and looking to consume human (or non-human) flesh and/or brains. I think Night of the Living Dead, The Walking Dead, etc.. What I don’t think of, are scientific reanimations of corpses, black magic being used to take over others’ bodies, or any of the other things that happened in this book.

H. P. Lovecraft is one of the authors that is considered “must read” for any goth – and being a goth I felt that I must give this a try, at least once. I find that I’m not particularly entranced by H. P. Lovecraft’s writing style, nor am I particularly impressed with what the author and publisher chose to consider zombie stories. These were relatively creepy, but not downright scary and quite frankly, didn’t spark anything past mild interest.

I finished the book for the sake of finishing it as it isn’t a particularly long book. The stories were all right, but not worth more than 3 stars.