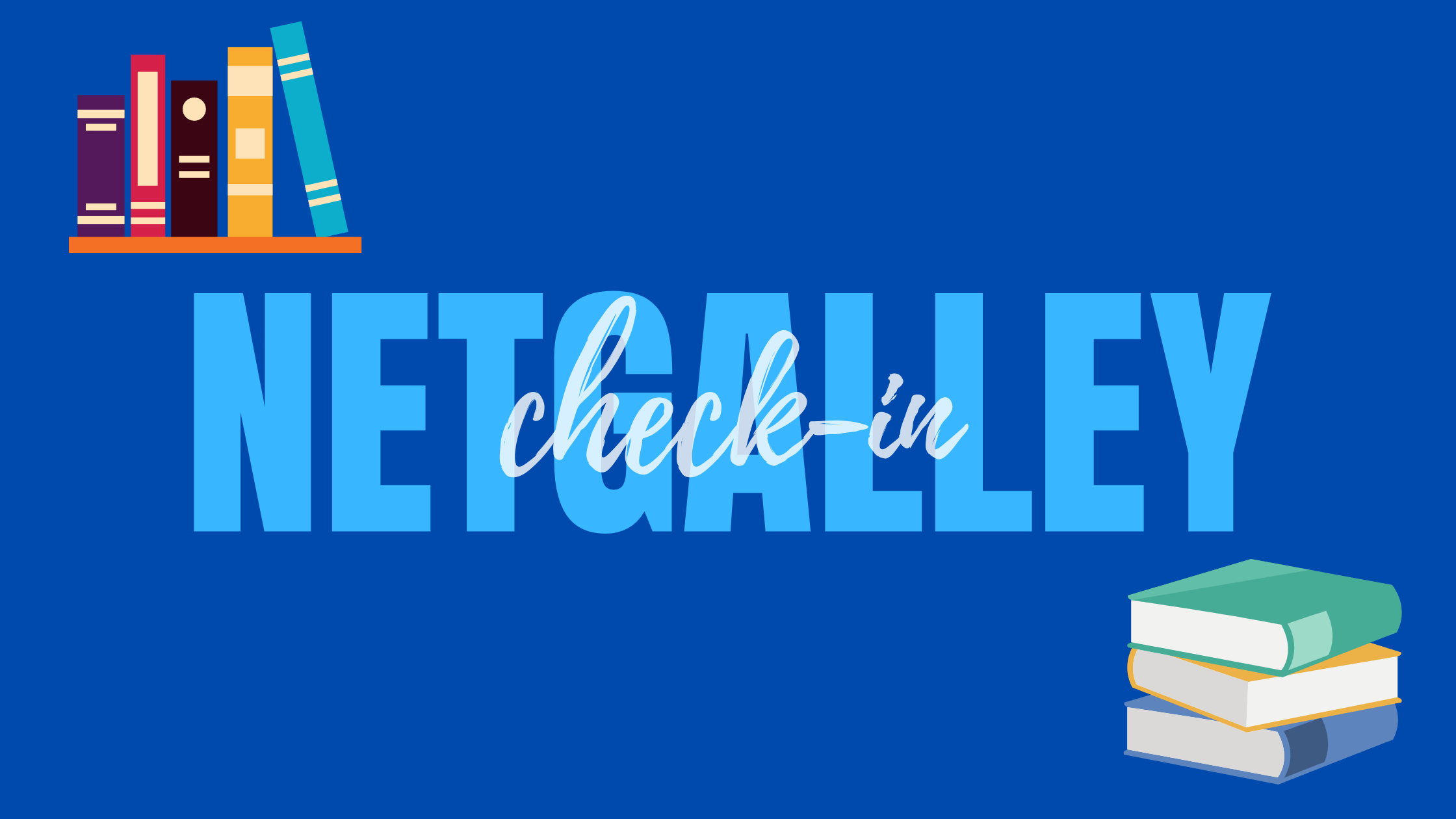 I got this idea from Danni at _ForBooksSake – each week, I will detail what my current NetGalley feedback ratio is, what books I have in the NetGalley TBR, what books I’m currently reading, and what books I’ve finished, if any.

My current feedback ratio is 40%.

This is a 10% increase from last week, because I’ve only been approved for 10 books and I’ve sent feedback in on 4 of them so far.

Back in London’s swinging ’60s, Steve Cook was teen idol number one. But that changed when a sixteen-year-old fan was found dead in his hotel room bed. Steve’s career came to a crashing halt after he was dumped by his record company and arrested. Now, in 1978 San Francisco, Steve works construction, still dreaming of a comeback. Until his eleven-year-old daughter is kidnapped. Steve turns to one person for help: Colleen Hayes. She was quite a fan herself, back in the day. And she knows what it’s like to be on the wrong side of the law and live in judgement for the rest of your life. It doesn’t take Colleen long to realize something fishy is going on with the kidnapping of Melanie Cook. What transpires is a harrowing journey through a music industry rife with corruption and crime. Colleen’s search takes her through San Francisco’s underbelly and all the way to ’70s London, where she discovers a thread leading back to the death of a forgotten fan in Steve’s hotel room.

Twenty authors, twenty gods, twenty stories that will chill, thrill and kill you. The Gods of the Pantheon present their first anthology of Halloween stories, the time for Samhain draws near…

A gripping thriller in the tradition of Thomas Harris, Michael Connelly, and Jo Nesbø, THE PVRITAN is a thriller fueled by a serial killer terrorizing Boston and the detectives trying to stop him. Who is the Wing-maker? Can he be stopped, or has his next victim already taken flight?

“But the eyes of the wicked fhal faile, and their refuge fhal perifh, and their hope shalbe forowe of minde.” —Iob 11:20, Geneva Bible

All alone, in a dark, earthen tomb, a boy’s prayers are unheard. Now, he has risen from his premature grave–and there is hell to pay.

A MAN’S BODY is found hanging in the Boston Common, his eyes missing and skin mutilated beyond recognition, transforming him into a winged demon. Weeks later, a young girl’s body is discovered under a layer of ice, her skin carved into angel wings.

Boston Homicide Detective Marti Zucco and her partner, Detective Neil Cavanaugh, are in a race against time to stop the wing-maker, a twisted psychopath who has left a trail of complex clues. A gang-ridden path that will take them through the gates of Hell and into an underground world of sexual perversion.

For Marti, her faith will be tested as more bodies continue to mount and she walks among the ghosts, following in the footprints of the killer known as the Puritan.

Can. He. Be. Stopped? Or has the soul of his next victim already taken flight?

Some vendettas have more lives than others.

The gods walk among us. Some lurk in the shadows, masquerading as mortals; others embrace their celebrity status, launching careers from Hollywood to Capitol Hill.

One of them just murdered Cairn Delacroix’s mother.

As Cairn sifts through the rubble, she uncovers a conspiracy two decades in the making: a cursed island, the fellowship of gods who journeyed there, and the unspeakable act that intertwined their fates. One by one, the members of that voyage are dying, and Cairn’s investigations land her in the crosshairs of the rogue goddess responsible.

With the help of Nanook, a polar bear god turned detective, Cairn descends into Boston’s underworld of supernatural crime and political aspiration. To avenge her mother and unmask her assassin, she’ll first have to reckon with a gut-wrenching secret that will rewrite the life she thought she knew.

Shocking twists cascade toward an explosive finale in this thrilling new mystery from Karsten Knight, author of the WILDEFIRE trilogy and NIGHTINGALE, SING.

Fired for bias against the U.S. president, ex-CIA Russia expert Max Geller gets a chance to redeem his reputation and make a fortune when he is hired to investigate the president’s incriminating ties to Moscow. Jill Rucker, an undercover CIA agent, is assigned to work with him—and she does—when she’s not pursuing her own conflicting goals. The search takes them to England, Russia, Panama, and Switzerland. Along the way, Max runs afoul of British intelligence by inadvertently compromising two of its operations. He gets help from an anti-Russian underground cell in Moscow, is assisted and threatened by the Russian mafia, exposes a massive Russian-American money laundering scheme in Panama, and uncovers a plot to protect the president from mounting accusations threatening his presidency. Close behind is Zabluda, a Kremlin assassin, who means to kill them and their sources and destroy evidence incriminating the president. Max discovers that he has been betrayed by his former boss, his current employer, and his girlfriend. Seeking revenge, he takes on a powerful Washington law firm, the CIA, and the Russians. Max Geller is the spy who went out in the cold—and no one wants him to come in and tell what he knows.

Matchmakers don’t fall in love with their clients… unless they do.

She doesn’t believe in love…

Victoria Medrano is a professional modern-day matchmaker who earns her living by finding suitable husbands for her rich clients’ daughters using a foolproof system – one that takes love out of the equation. Snaring the right clients and establishing a sterling reputation is the career stepping stone she needs to finally earn the kind of money she’s always dreamed of.

… but love can be found in unlikely places.

When her best friend Tonya becomes her client and gets set up with the handsome and charming-when-he-wants-to-be Mark Dunham, Victoria is inexplicably drawn to him. As she suddenly questions her beliefs about love, she has to make a decision. Is it okay to fall in love with your best friend’s perfect match?

From the finalist of the 2020 Readers’ Favorite International Book Awards in Fiction—Supernatural comes the much-anticipated sequel of the Haunting Clarisse Series.

★This book can be read as a stand-alone

Running from evil is not a bad idea…until you realise you can’t hide.

Old Tailem Town is an Australian pioneer village that has built a reputation as the creepiest ghost town in the southern hemisphere.

But some ghosts get tired of hanging around and latch onto you. Running from evil is not a bad idea until you figure out you can’t hide. The houses and the Church that were moved and renovated to create the perfect paranormal tourist attraction carries dark secrets within its walls.

Will Clarisse be able to confront her biggest evil challenge yet or will Little Charlie rally all the towns ghost into an impeccable evil stronghold? Will her meeting with the local Shaman unleash secrets with evil consequences for digging too deep into the towns past?

Matters become complicated for Clarisse when a circus of young performers passes on the outskirts of town triggering unexpected paranormal events and unleashing memories of a one hundred year curse.

The tourists keep flocking in for the paranormal experiences run by a local entrepreneur–unbeknown, caught in the crossfire of a battle for evil supremacy. Will the town succumb to Little Charlie and his evil crew?

Well, that sums it up, how is your NetGalley feedback going?